Buying a property on the island should be easy. By choosing a company that specializes in this type of property you have chosen a team of experts. The full time sales agents are among the most knowledgeable and quality service oriented professionals in the industry. They will make the transaction as smooth as possible from selection to closing. 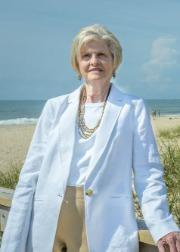 Alice Collins, president of CENTURY 21 Collins Realty, Inc., moved to St. George Island in July of 1973 with her husband, John Collins, and their eight-year-old son Johnny.

Prior to their move to the island, Alice worked in the commercial real estate field for nine years in Tallahassee, Florida. When Alice opened her real estate and rental business on the island in 1973, there were only 20 full-time residents on the island.

Alice was instrumental in the implementation of zoning districts in Franklin County. She has been active in the community, and has held many volunteer positions over the years. Alice is a past president of the St. George Island Civic Club, of which she has been a member since 1973. She also served on the Civic Club's board of directors for many years. She was a charter member of the SGI Volunteer Fire Department, and has been involved with the Volunteer Fire Department since 1974. Alice served on the board of directors and helped obtain monetary donations as well as donations of property, labor, and materials needed to construct the first fire department building on St. George Island. Alice won 1st Place in the first annual SGI Chili Cookoff in 1982. She has since helped expand the event to include an auction, and has served on the board of directors.

Alice became a founding member of the Realtor Association of Franklin and Gulf Counties. Alice established the MLS, served on the association's board of directors and was named Realtor of the Year in 2005. Alice served as Association Manager of the Villas of St. George from 1984-2005, was elected first female president of the Apalachicola Bay Chamber of Commerce in 1986, and served on the Florida Seafood Festival Board. In 1994, Alice helped organize the publication of the first cookbook to benefit the St. George Island First Responders, and continues to serve on the founding committee, which released the most recent edition of the cookbook in November of 2013. Alice was appointed to serve on the first Franklin County Tourist Development Council in 2005 and served two four-year terms. She is a life-time member of the Cape St. George Lighthouse Association and supports their efforts.

Alice Collins has a strong reputation for honesty and integrity, and her commitment to customer service is at the heart of the success of CENTURY 21 Collins Realty, Inc. 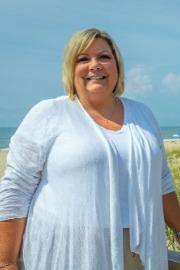 Ticia Nix is a native Floridian and has lived in Franklin County since 1991.  She has been with the CENTURY 21 Collins Realty, Inc. team since 1994.

Ticia moved from the sister company, Collins Vacation Rentals, to our Century 21 sales office in the fall of 1996, and was promoted to Sales Office Manager in February 2001. She then went on to obtain her Real Estate license in 2004 and her Brokers license in 2016, along with her GRI designation.

Ticia has been active in our community for many years by serving as the Secretary of Keep Franklin County Beautiful, the Secretary/Treasurer for the St. George Island Charity Chili Cookoff from 2003 to 2019 as well as served on the local Realtor Association grievance committee.

Ticia and her husband Ron reconnected again after high school and were married in 2019. Together they have 6 children and 10 grandchildren. In their spare time, they can be found hanging on the beach or by the pool, working in the yard or tending to their barnyard of animals.

28-mile barrier Island in the Florida Panhandle and voted #4 Beach in the Nation by Dr. Beach....
More Details

Our real estate agents are among the most knowledgeable and experienced in the industry.

Look for your Island dream home or investment property!

Discover our current lot listings on St. George Island and the surrounding areas.

Looking for a beach getaway?  Check out our vacation homes on St. George Island!