St. George Island grants its visitors a rare opportunity--a trip to a natural, secluded, uncrowded Florida island teeming with white sand beaches. Not only will you experience an uncrowded getaway, but you will also experience convenience. St. George Island is located approximately 75 miles west of Tallahassee, approximately 80 miles east of Northwest Florida Beaches International Airport in Panama City, and is easily reached by bridge just off US 98, the scenic route along the Panhandle coast.

St. George Island runs 28 miles long, but is only about one mile from bay to gulf at its widest point. It is nestled between warm Gulf of Mexico waters to the south and serene Apalachicola Bay to the north. The Apalachicola Bay is renowned for its fishing, and is one of the few remaining places where you can experience traditional oystering.

St. George's first inhabitants were native members of the Muscogee (Creek) Nation between the 10th and 15th centuries. European colonists first arrived in the late 1700s and conflict ensued. Eventually the Muscogee people ceded a large tract of land including St. George Island to trader John Forbes and Company. St. George was mainly utilized for turpentine production, due to its large pine forests. During World War II, St. George Island was a practice range for B-24 bombers, and in 1954, Bob Sikes Cut was created, separating Little St. George Island from the main island. This shipping channel provided more efficient access to the gulf for the area's growing fishing industry. 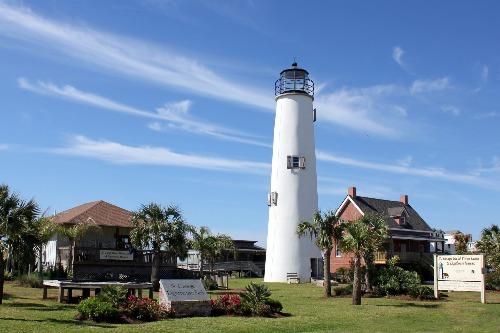 The Cape St. George Island Lighthouse originally stayed on little St. George after Bob Sikes Cut was constructed. This lighthouse was built in 1833 but was soon destroyed by storms some 13 years later. When it was reconstructed in 1848, original materials were incorporated, and the lighthouse was built to a taller 75 feet over the original 65 feet. Sadly, this updated version was again destroyed in a storm, only three years after completion, along with nearby Cape San Blas Lighthouse and Dog Island Lighthouse. Again, in 1852, the lighthouse was rebuilt, this time to stand for 153 years until hurricanes, wars, and erosion caused it to collapse into the gulf on October 21, 2005.

The newly formed St. George Lighthouse Association set out promptly to restore the lighthouse, and, along with the State of Florida, salvaged as much of the original structure as possible. Volunteers cleaned mortar from 20,000 of the original bricks so that they could be used in the reconstruction of the lighthouse. The original pieces of the iron lantern room, twisted in the fall, have been preserved as artifacts and used as patterns to reconstruct the graceful birdcage enclosure that once housed the third order Fresnel lens. Volunteers helped reassemble the lantern room, which was displayed in the county park until time for it to be hoisted to the top of the rebuilt lighthouse.

Today, St. George Island is most often visited for its beautiful beaches, great fishing, and calming natural environment. With the advent of bridge access to the island in 1965, tourism reached new heights. The Dr. Julian G. Bruce St. George Island State Park stands as a testament to the natural beauty of St. George Island, spanning a gorgeous 1,883 acres at the eastern end of the island. While we think this natural treasure is the greatest of all, visitors may be interested in the legend that pirates buried a treasure on St. George Island in the late 1700s.

Great care has been taken in the development of St. George Island, with the aim to preserve the beauty of the area. Strict building codes require minimum square footages, allowing one single-family dwelling per lot and limiting height to 35 feet from the first habitable floor elevation (meaning no high rises). Additional architectural controls in several areas, particularly St. George Plantation, ensure the integrity of the Island.

Meet us at St. George. You will find that our careful investments in our community have created an environment that feels like both home and an escape in one. Come soon for a vacation, or stay for a lifetime!